Rotarians recited the Pledge of Allegiance.

Michelle lead participants in the recital of the 4 Way Test:

Auction Committee – Today after the meeting will be the first Auction Committee Meeting after the Lunch meeting (1pm). We are now less than 3 months away and A LOT of planning goes into this project. So please consider joining the committee and helping the team build an amazing Auction. The Committee plans to be available meet after the club meetings to discuss progress. Please see Michelle and sign up to help out in some way. Also now is a good time to begin finding procurements.

Paul: Is now in the middle of Honey Harvest. He took about 100 lbs of honey off of one hive yesterday. It was a lot of hard work. He also announced that Ralph is on vacation in California and they noticed something off and thought he maybe had a stroke. He took an ambulance to the hospital. After all of their tests they think maybe he had a TIA and that he should be OK.

Auggie: Confessed that he has a Japanese Maple. He donated a handful to Rick who later created a wonderful Bonsai display which Auggie accidentally forgot to have someone water when he was on vacation. He felt bad and replaced it with a new seedling hoping Rick wouldnt notice. However he decided, in honor of living and speaking Truth as a Rotarian, came clean and admitted to us all his trick. 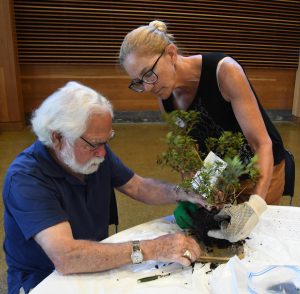 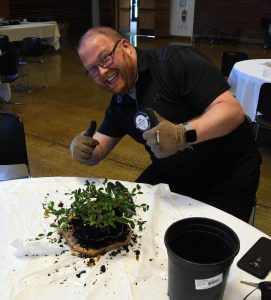 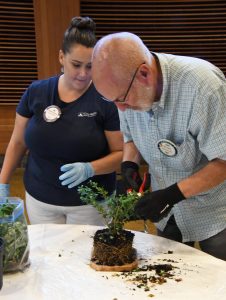 Today was a special meeting where we got a hands-on lesson on the art and practice of Bonsai from Rick Kaufman. Rick has been pursuing the ancient Japanese art of Bonsai (pronounced “Bone-Sigh”) for over 65 years. Bonsai translates simply to “Tree in a Tray” and has been around for over a thousand years, originating in China and spreading throughout many Asian cultures in different forms. To be considered Bonsai, it should meet a certain criteria, but is essentially a reduced size mimicry of real trees in their natural conditions and environments. all aspects of the tree should therefore be to scale. So plants with bigger leaves would not be appropriate.

At the Rotary Meeting, Rick came prepared with several potted plants, and we all split up into groups of two and got to try it out for ourselves! We got out our gloves and sheers, unpotted the plants, cut out half of the root system, and used wire to attach them to a small block of wood. We then got a chance to get some instruction from Rick and Kimberly on how to best trim our plants as Rick explained more about the art and culture of the practice. In thanks to Rick, who purchased the plants for our experience, we donated to the club and were able to take our Bonsai plants home. We will all try to keep our Bonsai healthy with a bit of tender love and care, along with keeping a damp soil. Big thanks to Rick for providing a newly unique, fun, and educational meeting presentation!

If you would like to learn more about Bonsai, Rick has been teaching all levels of experience for decades. Reach out to Rick to possibly schedule personal lessons.

What do I know about Bonsai Trees? Very little.

Today I met with fellow Rotarians to practice the art of Bonsai. To begin we all exchanged pleasant trees.

Doug lead participants in the Pledge of Allegiance.

Michael S lead participants in the recital of the 4 Way Test:

Community Announcement – The Sherwood Wine Festival, put on by the Rotary Club of Sherwood, will take place on August 5 & 6. You need to purchase tickets to this event. There is an Exclusive Winemaker’s Dinner on Aug 5 from 4pm to 8pm. The Wine tasting Festival is Aug 6 from 12pm to 7pm.

Auction Committee – Next week will be the first Auction Committee Meeting after the Lunch meeting (1pm). We are now only 3 months away and A LOT of planning goes into this project. So please consider joining the committee and helping the team build an amazing Auction.

Voluteers needed for Interact Club Project – Need some Volunteer help for the next Interact Helping Paws Helping People project taking place on August 6th which takes place from 10am to 2pm. The Rotarian will be helping set up and tear down, which is important to meet the needs of the grant.

Pancake Breakfast – THIS WEEKEND! Everyone will be charged and given 4 adult and 4 child tickets, which cost the same as previous years: $7 adult and $4 kids. Aaron has these tickets, you can pick up from Aaron at a future meeting and will also have extras available if you want to pick up at his office at Lewis Audio and Video on 99. For extra tickets, you can buy some online (www.newbergrotary.org/pancakebreakfast) or ask Aaron for paper tickets. NOTE: WE NEED SOME MORE VOLUNTEERS TO SIGN UP, ESPECIALLY ON SUNDAY!

Judy: Reminded us about last year’s Kenya Schools project that was organized by the Interact Club. They took it over from the Seaside Club. It was a fundraising project where we collected money to donate to the Rise to Shine Foundation, in which teenagers in Kenya are provided an opportunity to attend high school, which is not an opportunity inherently provided in Kenya. The Seaside club funded 52 students for their first year of high school, and our Interact and Noon Rotary Club decided to work to fund all 52 kids for all 4 years fo high school. Last year we even were able to fund extra students AND have $4,000 in funds that were donated after the grant finished. This year will be the 3rd year for these students and we wanted to start off by donating today’s Duck money to this project.

The Club then essentially participated in a paddle-raise type effort, ultimately raising a Grand Total of $1,686. Thank you to everyone who has helped support and spread the word for this project. 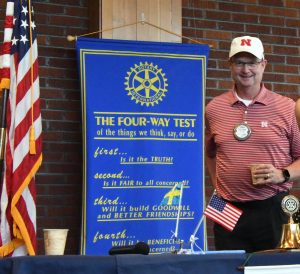 He noted that his family is the most important thing in his life. He married his college sweetheart and best friend Meryl. They have now been married for 35 years and together 39, having met at George Fox. After graduating and finding employment, they got engaged. They have 2 kids, a daughter Morgan who went to Linfield and married HER college sweetheart, Linfield’s top football player at the time. She works for a national recruiting firm. They also have a son who went to Oregon State and was involved in their football program doing video editing. He had an NFL internship and even received an offer to work for the Detroit Lions, but ultimately accepted a job working for the University of Nebraska, making Grant an official fan. They also have 2 Poodles.

Grant’s hobbies includes cooking, grilling, hunting, and playing Hockey, which he decided to pick up at the age of 40.

Grant grew up in Newberg on 9th street, attending K-12 in Newberg and ultimately attending and playing baseball at GFU before transferring to U Washington, resulting in his becoming a huge Huskies Football fan, before transferring back to GFU. After school he got a job in Medford, then moved to Seattle, Spokane before leaving his job and moving back to Oregon and getting hired by Adec where he was a director and then VP of Sales for 12 years before being recruited by Patterson Dental in Minnesota to be their VP of Sales for 3 and a half years before moving back to Oregon in St Paul. Joanne Austin convinced him to come back to Adec upon his return to Oregon where he stayed for 8 more years. He then got laid off following a restructuring and began his own Dental Brokerage business until joining DCI in Newberg as their VP of Sales.

Grant has played a huge part in our club over the years and we are very excited he is back!

When a clock is extra hungry, it goes back four seconds.