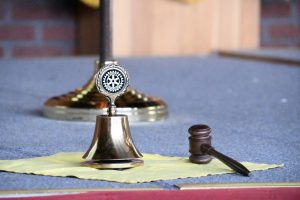 Tony Lelack reminded us, with some examples, of the many/varied ways we see Rotary’s influences not only in our local community, but way beyond…regionally and internationally.

Ralph Koozer gave us an update on his wife, Gail’s, situation with the debilitating disease, PSP. Among other issues which took her to the ER twice recently, because she has lost control of voluntary muscles, including swallowing, she must be fed through a tube. He thanked all who have visited and/or called….and those who have sat with her allowing him to get out of the house from time-to-time.

Program for 8/29/2018: Our speaker will be Ryan Dougherty, Vice President of Enrollment & Marketing at George Fox University….. “…I’m excited to come and share about all the exciting things going on at George Fox…”

Be reminded again of the “Tunes on Tuesday” free summer concerts wrapping up this month at the Cultural District Plaza…for more information go to:

By all accounts, according to those who attended, the special Buttesville “field trip” arranged by Corey Z. was a complete success! For those who were unable to attend, here’s a brief historical review: The Buttesville General Store is an Oregon State Heritage Site and is operated by the Friends of Historic Champoeg. All proceeds from the sale of just about everything in the store benefit educational and interpretive programs and Champoeg State Park, which is conveniently just a few miles down the road. More information to be found on the website….just enter “Buttesville, Oregon” as a search request.

Todd Engel handled this week’s DUCK “offerings”…and did a terrific job of “extracting” contributions from several Rotarians present…including “Congratulations” to the two “newlyweds” in the club….and NOT married to each other!! Newlywed Geoff Gilmore reported on the progress of the Rotary Mural Project…. The “Grand Opening” for the mural is still in the planning stage, contingent upon the project’s completion date. 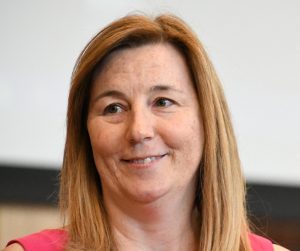 Newberg Noon Rotary Club prides itself in its involvement with our delightful, livable city. So, it is only fitting that we get occasional updates as to what is happening within City Hall... and today’s speaker was Cheryl Caines with the City of Newberg Planning Department. She spoke in depth of the City’s “Riverfront Master Plan”…and how it is in need of making changes from when it was first adopted in 2002. She backed up her comments with a short-but-comprehensive show of images on our “big screens”. A public “VISIONING” meeting is planned for Edwards Elementary School Cafeteria tomorrow [August 23] to get input from the community. Basics of the The Vision Statement include, among other considerations, “..a place that is accessible, visually appealing, and safe.” For those interested, a Market Analysis can be found on the City’s website. She provided us with a variety of images of how other cities have addressed similar “riverfront” planning challenges, including Eugene, and Spokane, Washington. There was a LOT of discussion as to the multiple/mixed uses [i.e., residential, recreational, industrial, retail] already in existence as well as those suggested for the future, with the zoning, geographical and geological challenges, unstable riverbanks, and “What about the old mill site?” Cheryl’s presentation objective was more to bring awareness of the on-going Riverfront Master Plan efforts to get input from the citizenry rather than to inform us as to any definitive decisions having already been made on the subject. Cheryl was assisted/backed-up by our guest *Rosa Olivares, the City’s Community Engagement Specialist.

A BIG THANKS to Cheryl for a very informative presentation!

[P.S. – Editor’s request…would whoever is GREETER please put your name on the data sheet AND please write (legibly!) the names of all guests….and who their “sponsor” for the day is.] 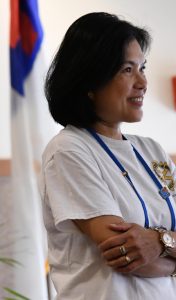 ~ Opening Pledge ~
Michael Pollok did the Pledge….Thanks, Michael….
~ Visitors/guests ~
Dr. Stan’s guest was his son John Kern…..a big “HELLO and WELCOME, John!”….
Welcome to Visiting Rotarian Steve Jensen from the Tigard Breakfast Club! Glad you could join us today!
~ Rotary Moment ~
Walter Want provided yet another SOLID Rotary Moment for us….Thanks, Walter!
~ “Tunes on Tuesday” ~
Corey reminds us of the “Tunes on Tuesday” free summer concerts during July & August at the Cultural District Plaza…for more information go towww.TUNESONTUESDAY.com
~ Pancake Breakfast ~
Jeff Lane reminded us of a number of open volunteer slots for both Saturday & Sunday for our Pancake Breakfast jointly held with the Newberg Early Birds…. AND….don’t forget to contact Curt Walker for Pre-Event tickets…as all the proceeds from those we sell PRIOR to the event go into the club’s coffers!
~ The Duck ~
Laura Tilrico handled this week’s DUCK “offerings”…and did her usual fine job of it, too! A Special Thanks to Auggie for covering MY* brag on another [46th!] very successful Concours d’Elegance put on this past week-end by the two Rotary Clubs in Forest Grove! [*note: Rick.
….your “humble” Newsletter Editor…is the surviving co-founder of THAT Rotary fundraiser in F.G…and proud of it! What a FANTASTIC TEAM EFFORT for Forest Grove Rotary!]
~ Today’s Program – Scouting ~ 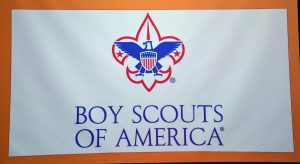 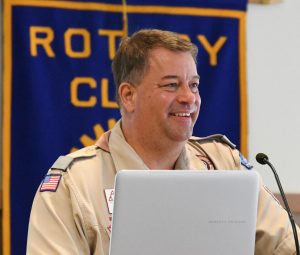 Today’s PROGRAM speaker was Boy Scout District Executive, Dave Carroll, giving us an update on Scouting programs….locally, council-wide…and internationally, as well. Our local Boy Scout Troop 265 is doing well, lots of activities..and growing. Executive Carroll also spoke extensively on the matter of females in Scouting…noting that there are females in most Scouting programs across the globe except in Muslim countries. Scouting’s Venture programs are geared for Scouts wanting to tackle specific, more focused activities. FAMILY SCOUTING is now being stressed in the new Scouting programs. Dave provided written/ graphic material the organizational structure of how all this fits together. He spoke to other programs for youth and how approximately 60% of today’s youth are NOT involved in ANY youth-oriented programs…. Executive Carroll also encouraged adults’ recruitment of more youth into such programs as well as adult participation in not only Troop activities, but volunteering in District leadership/ advisory capacities. THANKS for YOUR continuing dedicated Scouting efforts, Executive Dave Carroll!
~ Next Week’s Program ~
Brian Snider, Department of Electrical Engineering & Computer Science, George Fox University, will talk to us on AI – Artificial Intelligence…at Friendsview…Don’t miss it!
~ and this week’s closing with….. ~
President Om closed our meeting today with an enthusiastic reminder to…..
~ “Be the Inspiration!” ~
Sell those tickets and we’ll see y’all at the Pancake Breakfast!
In Continuing Rotary Service,
Rick Kaufman
Newberg Noon Rotary
Newsletter Editor
[BTW…any/all additions/deletions/corrections/suggestions/special stories of Rotary Service, are welcome…as I am just getting the hang of this “newsletter” job! My e-mail is: rmkaufman@yahoo.com]