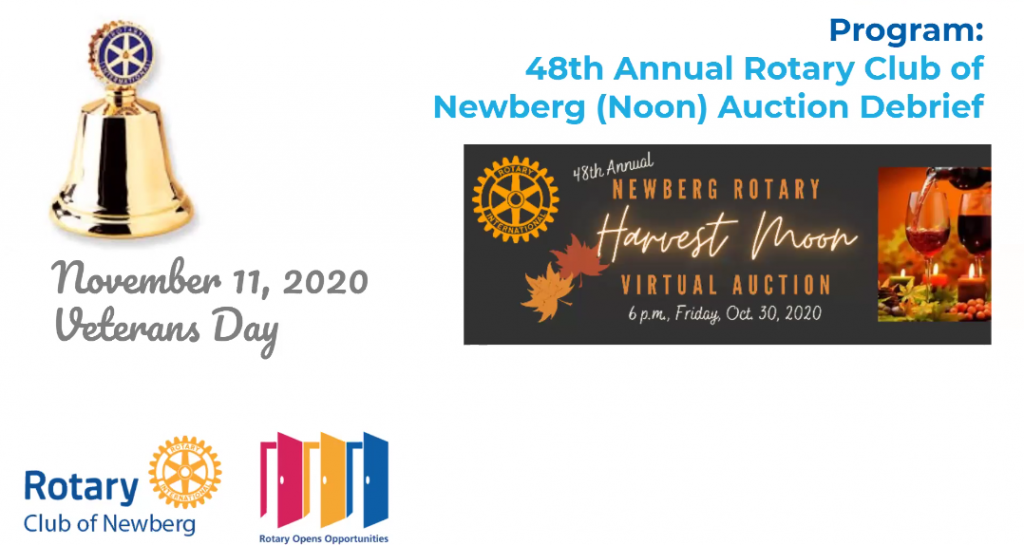 President Shannon Buckmaster welcomed Rotarians and Friends of Rotary to the Zoom meeting at 12:00 p.m. Wednesday, November 11, 2020.  The Rotarians split out into breakout groups to start the meeting.

Judy lead participants in the Pledge of Allegiance.

Auggie lead participants in the recital of the 4 Way Test:


Shannon reminded us that there are many veterans serving in our club and spoke on the importance of gratitude towards those individuals and recognized that Patriotism is not a political ideology, but a feeling based on appreciation for all we have.  The club then shared a moment of silence in respect and gratitude for Veterans in our club, community, and nation.  Walter Want had shared some of his experiences on the front page of last week’s Graphic.  Thanks Walter for your shared stories.

Shannon opened the floor for anyone to share remarks or comments related to service.

Laura:  Her club in Texas holds a fundraiser whereby they invite family, friends, club members, and community members to buy a flag for $40 in honor of someone they know who served.  They then post all those flags on Veterans Day in the park downtown, and then give you the flag you bought after it is flown.  Last year Laura bought a flag for her husband and then had it framed.

Corey:  Last week the Morning Club lost a member Ed Howard, who was also a Veteran, to Pancreatic Cancer.  He was a great person, colleague, and Rotarian.  Paula and Auggie echoed his words, sharing a bit about Ed’s service and passion for running.

Geoff:  Recognized his Father, who served in the Navy for 26 years throughout Geoff’s life.  They used to record and send messages on Reel-to-Reel tapes.  It shaped his father’s character and that of the whole family.

Auggie:  Auggie gave props to Walter for being able to keep a secret for so long.  But also gave thanks to all who served.

Doug:  Celebrated the 245th first day of the US Marine Corp.

No Guests today, as last week we inducted a slew of new members!

Shannon B:  Shannon and her family got flu shots at Edwards Elementary and also admitted that she realized her kid had ironically been behind on receiving his Polio Vaccine, but luckily they were able to get that done on the spot.

Julie:  Will send money out of Walters account as punishment for his infraction of publicizing in the Graphic that they met in a Bar.

Mike:  Gave thanks to Laura for her hard work, patience, and persistence in the difficult grant project she just concluded.

Auggie:  This past week he had conversations with their partners in Guatamala and they reached the conclusion that they will be cancelling their upcoming trip in March due to COVID.  They typically prepare 4-5 months in advance, but due to increases in US cases they felt the need to cancel.  He shared that they have heavy restrictions related to COVID and those really helped their numbers.  Compared to the US they are doing great.

Judy:  Gave a big shout out and Kudos to the auction team for the quick and convenient deliveries of items.  She has received and hung the wonderful painting by Laura she won at the auction.

Joe:  Used Walter in his Superintendent Comments during last night’s School Board Meeting as an example of the many Veterans who may not be able to tell their stories.  He appreciates Walter and all other Veterans who served.  Side note: he also has donuts on his socks.

Paula:  Contributed in honor of her father who served as a Sergeant in World War II.  He left behind a wonderful collection of photos taken during his duty.

Shannon Knight gave thanks to all who participated, from the auction team to the people who donated items, to buyers.  Many folks went above and beyond to help with the auction.  The first award they gave was to the Rotarian with the most Friends and Family who joined the auction:  Mike Caruso!  Thanks Mike.   The award for best footware was Om!  She shared her heels during airmeet and was a good time.  The award for best Sponsor Support goes to Geoff and Spike!  Thanks for your hard work finding and managing Sponsor support!  The award for the best Auction Team Encourager goes to Dan.  Dan frequently checked in and asked for opportunities to help and ease stress.  The next award is for the best Delivery Driver: Denise and Paris (Om’s Daughter and interact member).  Every contribution was noted and they are happy to announce that the auction raised a Net gain of $22,869.  They are looking for feedback regarding what went well and what didn’t.

They opened the floor for feedback:  Joe said he loved the live auction part and thinks it would be fun to do more of those items, but that the whole event was great.  Judy echoed that sentiment.  She also noted that she would have liked to have confirmed that they did or did not win the item in the end and when they would receive the items.  Geoff said he will share offline some ideas about marketing efforts.  He also suggested that they could pay for auction team members to attend other auctions for additional experience and ideas.  Shannon B pointed out that much has been learned regarding the pros and cons, and hope to keep valuable lessons going forward regardless of if the next auction is Virtual.  Paula asked about what can the club members do to help sell golden tickets and encourage engagement of members to sign up and register.  Shannon K said that the need to use the online portal created some obstacles.  It would have been beneficial to have people make calls to register previous or likely supporters.  Next year they hope to have several teams of several members each to run certain aspects of the efforts.  Auggie suggested maybe a scheduled call reminding Rotarians of the start if the auction.  Paula pointed out that last year they sold the tickets at the last second when the Auctioneer worked the crowd into buying the remainder of the tickets in the final hour.  Shannon B pointed out that they will improve the operation of the Golden Tickets.  Shannon K said 24 golden tickets were sold and about 70 users registered (though many more in attendance), whereby the typical stats is 200 attendees and 100 tickets sold.  Auggie proposed that there are opportunities to invite other neighboring Rotary Clubs.  It was pointed out that hundreds of postcards were mailed and many political and other prominent members of the community were invited, but fewer turned out than typical.

Group Consensus was that we all loved the Auction!  Thanks to the Auction Team for navigating this difficult year! 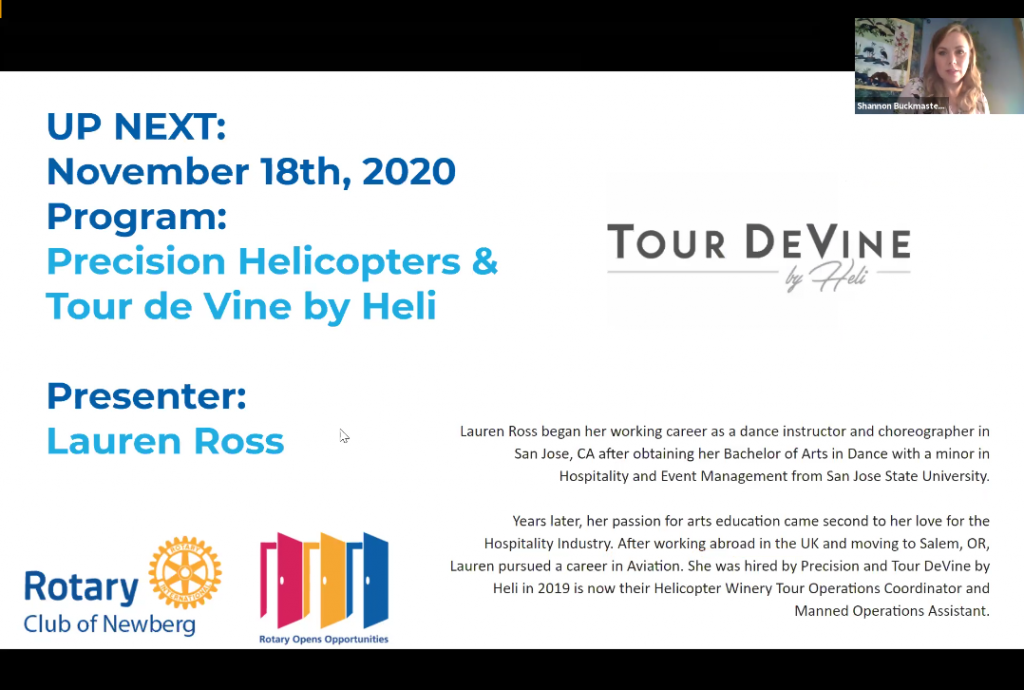 “Peace begins with a Smile.” 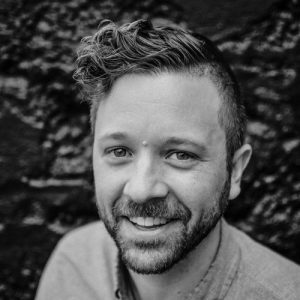 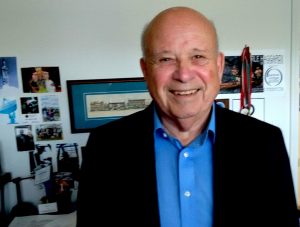