Another Rotary Pancake Breakfast is in the history books! Kudos to all who volunteered for and/or sponsored this much-loved community event. Detailed report to come…..

Since it’s the time of year for fairs and festivals, we were treated to a visit from representatives of both the Old Fashioned Festival and the Yamhill County Fair last week. 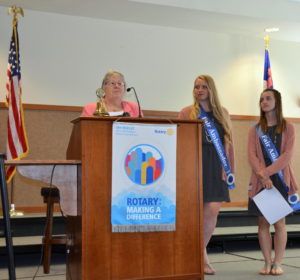 Leslie Lewis of the Yamhill County Fair Board introduced two of the three Fair Ambassadors–Tatiana DeHart and Abigail Berhorst. (Elsie Duyn was called into work and couldn’t make it.) Leslie indicated that each Ambassador is awarded a $1000 college scholarship.

Tatiana is a 2017 graduate of Country Faith Christian Academy in Newberg, and stated that she has looked forward to being a Fair and Rodeo Ambassador for several years. “I am incredibly thankful for my seven years of involvement in 4-H and the Yamhill County Fair. Preparing for the annual County Fair has inspired me to try new things, create goals and to chase my dreams.” Tatiana is headed to Oregon State to become a large-animal veterinarian.

Abigail is a 2017 graduate of Yamhill-Carlton High School and has actively participated for nine years at the Fair. “I am so happy to be named as a Fair Ambassador. Our County Fair has given me some of the best experiences of my life and I am very passionate about sharing these wonderful memories.” Abigail plans to attend Eastern Oregon University to major in Agricultural Education.
The Ambassadors have a busy summer planned to promote the Fair. They outlined all the activities and events, such as the “Bullmania” Rodeo, concerts, exhibits, carnival, and demolition derby planned this year. The Fair opens Wednesday, August 2 and continues through the 5th. For detailed information and schedules, visit www.co.yamhill.or.us/fair.
Missy Love accompanied the 2017 Old Fashioned Festival Court: Alexis Hayes, Allyvia Jones and Brooke Hansen. (Note: Princess Alexis was named Festival Queen last Thursday.)

Princesses Alexis, left, Brooke and Allyvia speak to our club.

Princess Alexis will be a senior at NHS this year, and said she is “looking forward to dedicating the summer to bettering our community, alongside Allyvia and Brooke.” She enjoys helping the community as a team captain for Relay for Life, and has over 300 hours of community service.

Princess Allyvia is 17 years old and a junior at NHS. She loves to read and enjoys working with kids. “The Old Fashioned Festival is very important to me because I’ve gone ever since I was born,” she said. “It has always been place for family and the community.”

Princess Brooke moved to Newberg in 2006, and the first event her family attended was the Old Fashioned Festival. She said she “fell in love with the parades, carnival and princesses,” and aspired to be a princess herself one day. She just graduated from NHS and will attend Portland State in the fall to study nursing. 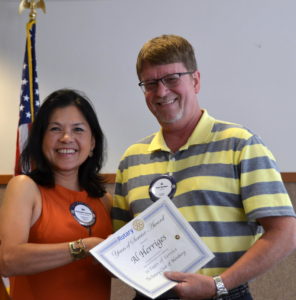 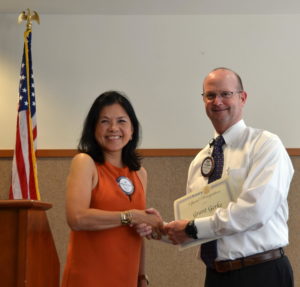 Om also presented a Special Recognition Award to Grant Gerke for his years of service as a chair of the annual auction. Thank you, Grant!

Rotarian Rick Kaufman, who plans to transfer to our club, joined us for the second week in a row.

Fred Gregory‘s guest was Jekabs Bikis, the new dean of the College of Business at George Fox. (BTW, Fred will be missing a few meetings….he’s heading off to visit his wife’s family in Uzbekistan.)

A general discussion was held at the end of the meeting to come up with some ideas for a future community service project for our club. Past President Leah Griffith plans to get a committee together to work on this. If you would like to participate, please contact Leah.

Marge O’Connell actually had emergency surgery for a detached retina, a very different and much more complex surgery than the cataract surgery we reported last week. Sorry for the misunderstanding. According to Marge, “Recovery is a matter of several months–vision return is 2 months on average; driving will probably be about 4 months.” Best wishes to Marge for a complete recovery.

Special thanks to Auggie Gonzales for the great photos. So glad our photographer is back from Mexico City, where he was able to welcome his sixth grandchild! 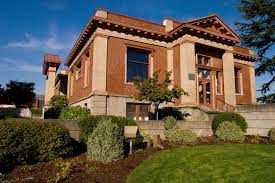