Here’s what went on this week.

We spent some time today talking about the Auction, which is just a couple months away on March 18th. Chair Denise Bacon 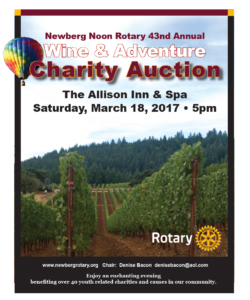 shared some of the fun items such as helicopter wine tours, VIP table at the Pancake Breakfast and many more great items. Now it’s up to you to come up with more items! We passed out the list of ideas and you’ll see that list in your email again. If each Rotarian comes up with at least 2 items we’ll have a great auction.

Also, on the main page of this web site you can buy your tickets for the auction and your Golden Ticket. For the newer members, a Golden Ticket at $100 gives you a 1 in 100 chance to win your pick from the items in the auction. This can be a trip or jewelry or even a BBQ for 50 of your best friends. You’ll know more what those options could be in the next few weeks. A 1 in 100 chance is pretty good odds.

And for dinner, be sure and sign up for yourself, invite your friends. Again you can buy your tickets online or at a club meeting.

Our program today was Rob Lewis from Anvil Academy. Rob is an experienced wood worker and has worked at Oregon Arts and Crafts. 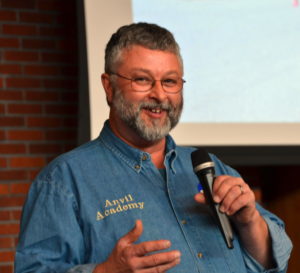 He’s developed a program here in Newberg (in Rotarian Jeff Lane’s former Newberg Steel site on Main between Hancock and First St.) to share the craft and discipline of building things and working with ones hands. His goal is to work with young people and give them skills and to feel like they can succeed. He shared the story of one young man having difficulty in school who hardly said a word to anyone, but he was learning skills at the Academy. One day he was outside using the anvil and someone walked by and asked him what he was doing. Instead of not being silent, he started talking and shared what he was doing with this stranger. He had gained confidence and was proud of what he was doing and it allowed him to speak up for himself. Rob is working with the schools and has a program with CS Lewis Academy to provide their industrial arts classes. He also shared some of the ideas for classes for kids and adults as well. http://anvilacademy.info/ And we may have an auction item where you could bid to have your family ride in a stage coach in a parade this summer. How fun would that be, especially for children or grandchildren!

Suzanne was off today, so this was my effort. I’ll be glad when Suzanne comes back 😉 Leah Griffith

“Snowpocalypse 2017” caused the Jan. 11 meeting to be cancelled, so it was nice to get back to rain and a regular meeting last Wednesday. And there were plenty of items to catch up on.

Like plans for the annual auction, for instance. Denise Bacon led us in a table activity to come up with more ideas for items to auction. (Note: Please be sure the March 18 date is on your calendar, as the auction is a bit earlier this year.) There were lots of great suggestions. One of my favorites: A Portland beer tour by bike! This is our club’s largest fundraiser of the year, so any help you can give Denise and the organizing committee would be appreciated.

Chamber of Commerce President Sheryl Kelsh told us about the upcoming Community Awards banquet Feb. 17 at the Cultural Center. Shhhh…it’s kind of a secret, but this is an event you won’t want to miss– our own Spike Sumner will be receiving the Edward Stevens Distinguished Service Award. The theme this year is “Winter Wonderland,” and the Chamber is now accepting reservations.

Peacebuilder Committee Chair Mike Caruso updated us on a couple of things:

Prez Leah Griffith asked for volunteers to help students train for the upcoming “Oregon Battle of the Books.” Come help elementary students prepare for their official school and regional battles. Volunteers will need to attend a training at the Newberg Public Library on Jan. 27 from 6:30 to 7:30pm and attend the practice battles on Jan. 28 from 9 to 11am at Joan Austin Elementary School. To volunteer, please contact Korie Buerkle at korie.buerkle@newbergoregon.gov or 503-537-0304.

MEETING GUESTS: Leona Todd introduced Merissa Baller with Lone Star Lending, who is interested in Rotary and is new to our community. Leah Olsen introduced Dr. Dan Reed, who is also interested in learning about Rotary and may join our club. Dale Welcome‘s daughter Clara Welcome was there to support her dad with his Classification Talk, which was the main topic for our meeting. 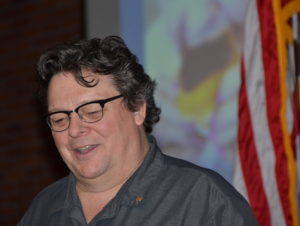 And Dale’s talk was fascinating…he has led an interesting, colorful life. He has been to many places and done many things. He grew up in Massachusetts, but has lived all over, including Seattle, Salt Lake City, Shanghai and Bangalore. He particularly enjoys sailing, reading and photography.

He has been married to his wife Joy for 32 years. Their first date was on Sept. 28 one year and they were engaged by Thanksgiving the same year. He said that made his father-in-law Stan Kern really nervous!

Dale said his biggest cheerleader was his mom, who passed away two years ago from dementia. She loved football, and attended all his athletic events. She also loved Dunkin Donuts, and he showed a great photo of her chomping on one.

Dale has a background in athletics. In fact, he still holds the record for the longest field goal at his high school –something he says he still puts on his resume! He is a skier, and said it was awesome to live in Salt Lake where he could be on the mountain top at 6am. He was a volunteer at the Olympics when it was held there in 2002.

He has three children–two sons and daughter–and two grandchildren, ages three and one and a half.

Dale described his educational background as starting out in photography school, “floundering around there,” and then finding his way to the University of Washington. (We don’t hold the fact that he is a Husky against him.) He obtained an accounting degree, and said Spike Sumner was first CPA he ever met. (Stan introduced them.)

He said he has held a lot of jobs, including stints with Deloitte, Kaiser, and Intel. 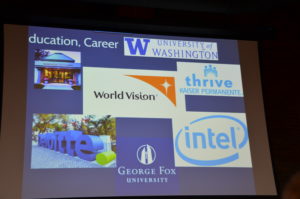 He now works at World Vision, where work has taken him to over 40 countries. In fact, he is going to Zambia, Malawi and Shanghai later this year.

“This is by far the best gig I’ve ever had,” he said. “I have been able to take my career and marry it up with my faith.”

He showed us a video about the organization, which is over 60 years old and headquartered in London. World Vision primarily helps out the world’s poorest people, and has 43,000 employees in 100 countries.

Dale told us about “Our Promise 2030.” World Vision has aligned its strategy with the United Nations’ 17 Sustainability Development goals and will work to completely eradicate extreme poverty globally by 2030.

Photography is still a main passion in his life, and Dale closed his talk by showing a nice sampling of his photos. Beautiful work.

Happy New Year, Newberg Noon Rotarians. Hope 2017 is off to a good start for you. Personally, I am ready for Spring. What a winter we are having!

After a couple of weeks off over the holidays, we had a compelling program last week to kick off our new Rotary year. Club Prez Leah was sick, so Todd Engle introduced our speaker, David Gallagher from Open Arms International. 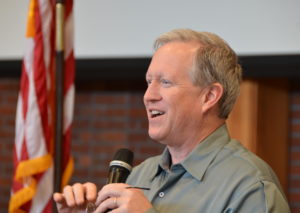 The vision of this organization is: “Transforming Africa, one life at a time.”

It all started in 2001, when David and his wife decided to go to Kenya to do charitable work. She was in pediatric intensive care and he in Christian ministry. Four months before leaving for Kenya, 17 people had volunteered to go with them to help out. According to David, “We did medical outreach in slum areas during the day and shared about Christ at night. There is such a need for hope there.”

One and half years later back in the U.S., friends asked him what he would really like to do with his life and he answered, ” Take medical and ministry teams to Africa.” These friends were able to provide him with a salary for three years to do this.

Ministering around Kenya, “I soon realized was like putting a bandaid on a gaping wound,” he said. So they decided to establish a base in Eldoret, a town of about a million people in the western part of the country. Eldoret is at 7,000 foot elevation and has an average temperature of 68 degrees year round. According to David, many Olympian distance runners come from this area.

They started Open Arms Village in a country which has been hit hard by HIV/ AIDS. “Orphaned kids are left to live on the streets,” David said. “Culturally, it is not normal to take others’ kids into your home.” They set up a series of foster homes, with a limit of 18 kids in each home. “That sounds like a lot, but many more is the norm,” he said.

In Eldoret, they have 52 acres and have done amazing things:

A 17,000-square-foot medical clinic is now under construction. “This will change everything,” he said. “It’s all about community transformation. Health care in Kenya is appalling. They put two people in a twin bed–tops to tails– in the hospital, it’s not sanitary, and there are frequent mis-diagnoses. We will be inundated when word gets out about the western-style care.”

Future plans call for adding a high school, which is different, as local custom is to send kids away to a boarding school.

“Our goal is to transfer leadership to local Kenyans,” David said. “Please come visit. And please don’t forget the other side of the world. At least there are social programs here in the U.S. There is nothing like that there.”

For more information or to donate, check out: www.openarmsinternational.org

You are invited to attend the upcoming free community event for Dr. Martin Luther King, Jr. Day on Monday, January 16 at the Chehalem Cultural Center. It will feature musical, choral and dance entertainment and a talk by Tiona Cage, a former Peace Corps worker in Botswana who is now with George Fox University. Also, check out the displays at the Newberg library featuring books by and about Dr. King. More event info below:

The kickoff of the national Peace Hub Tour, which will promote the work of the Rotarian Action Group for Peace (headquartered in Portland) is set for Sunday, Feb. 5 from noon to 3pm at the Aviation and Space Museum in McMinnville. More details to come.