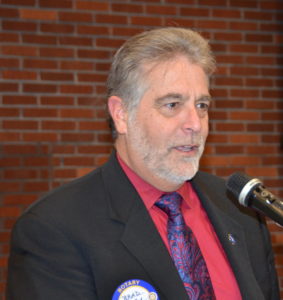 What a thought-provoking, informative program we had last week. Yamhill County District Attorney Brad Berry was our speaker, visiting as part of a self-described, “once-a-year service club roadshow.” His program was entitled “Myth Busters,” and he discussed important topics, such as the use of prisons and sentencing practices.

The “A,B,C’s” of Sentencing

Brad explained that there are basically two kinds of crime: misdemeanors and felonies. People arrested on a misdemeanor could be sentenced for up to 365 days, but don’t get jail time in Oregon. There are three classes of felonies: A, B and C. A’s get you 20 years, B’s 10 years, and C’s 5 years. Murder gets a life sentence.

Since 1989, sentences for felonies have been dictated by a set of guidelines. In an effort to get similar sentences in similar situations in various counties, there is a tool called “The Grid.” It has a “crime seriousness” scale on one side, and a “type of criminal background” scale on the other. This grid dictates what type of sentence a judge is required to render in any particular case.

Brad posed some quiz questions to the audience, and the answers were very enlightening. For example:

True or False? Prisons are full of low-level offenders

According to Brad, person/sex offenders make up 68% of the prison population, property offenders 19%, drug offenders 8% and “other” 5%. “Addicts go to prison, but not for possession,” he said. “If you sell large quantities of drugs or sell drugs to kids, then you go to prison. Drug addicts who commit other crimes go, too.”

Brad said the crime rate is stable currently, but with projected population growth, it is likely to rise. There are 14,200 beds in the Department of Corrections. If they are full, inmates are released or sentences are reduced. He said it is “very, very expensive to build a new prison–$150 million to open the doors.”

Brad summarized his presentation with some key points:

Who knew that Peaceful Fred Gregory, who has joined the Friendsview Board of Directors, had it in him to be such a “hard core” Duck $$$ solicitor? Wow, he must have set some kind of recordist week! Thank you, Fred.

President Leah reminded us that Newberg has a warming shelter, and asked for either volunteer help or donations for our community’s homeless when the temperatures get below freezing. For more information, please contact Denise Bacon.

REMINDER: NO MEETING UNTIL JANUARY!

The two highlights of last Wednesday’s meeting were the Classification Talk by Matt Stephens and the induction of new member Dan Keuler. Both guys are now in different stages of “Official!” 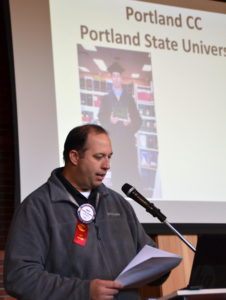 Matt Stephens, in the “Official” stage before the removal of the red ribbon!

Matt is the Country Financial representative in the Newberg area, offering insurance and financial services. His office is located in the Safeway shopping center.

He told us about growing up in Idaho, but moving to Oregon in 1997 so his father could go to Lewis and Clark to study for a change in careers. He developed an interest in sports by rafting the Snake River and skiing in Idaho, and then by playing basketball and running track at Lake Oswego High School. The interest continues today, and Matt helps sponsor various community sporting events, such George Fox football, fun runs and walks, and events at the Newberg Swim Center.

In high school, he started getting involved in “service stuff.” He was involved with the St. Francis Dining Hall in Portland and Los Embassadors in Tijuana, Mexico. After school, he worked with a traveling youth ministry out of Yakima, WA. “That was fun, but struggling work,” he said. He did outreach to prisons and schools, among other things.

A graduate of Portland State, Matt worked at a Marriott Hotel while going to school. “I enjoyed working with people and the fun business atmosphere,” he said.

Matt met his wife on a blind date on Valentine’s Day and they now have four kids–Paul, Chloe, Zora and Nina. The family enjoys doing things together, like camping, fishing, boating, and board games.

At the end of his talk, Matt answered some questions. What is the most difficult aspect of his job? “Finding work/family balance.” Why did he choose this particular business? “Well,” he said, “I’m a ‘numbers person’ who loves competition.” 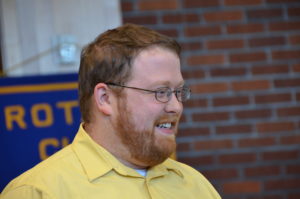 Dan Keuler in the “Official” stage of being inducted into the club.” Welcome, Dan!

Dan is a senior accountant with the City of Newberg (and is still a newlywed, by the way). He has a B.S. and an M.S. from the University of Oregon. We look forward to Dan’s Classification Talk soon. 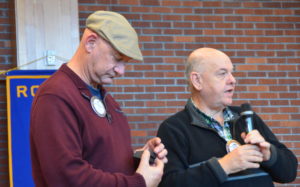 Jeff Lane, left, examines the Paul Harris pin that Mike Caruso had just given him.

Mike Caruso gave acknowledgment and a pin to Jeff Lane for his fourth Paul Harris commitment to the Rotary Foundation– meaning Jeff has donated $4000 to the Foundation! Thank you, Jeff.

Denise Bacon updated us on planning for the April 2017 auction. (Yes, planning is well underway. A website will be up soon.) Denise said the committee would like to put a focus on fun this year. They would like some ideas on fun things your friends might like to buy…. like maybe John Kerekanich washing their car or Auggie giving a flu shot! Please send your ideas to Denise.

Alan Methven did the Duck last week, so we also got a chance to hear about his winery’s new Tasting Room, located in Dundee. Be sure to check it out.

Marge O’Connell informed us that she sees no reason why she shouldn’t spend the month of January in Mexico! We’ll miss you, Marge.

And Paula Radich mentioned that she and her family (Paula is one of nine kids) celebrated her mom’s 98th birthday in early December. Wow.

Word has it that Spike Sumner had a very nice retirement party at Providence Hospital on Dec. 7. Congratulations, Spike!

Word also has it that Ron Wolfe, president of the morning club, has changed his place of employment to First Federal Bank.

As discussed at last week’s meeting, Rotary is one of the charities in the Amazon Smile program. Once you sign up, Amazon donates 0.5% of the amount of your eligible purchases to Rotary. Although not tax deductible, this program provides a simple, automatic way to support our organization. You’ll find the exact same prices, selection and shopping experience as on Amazon.com. For more info and to sign up, go to Smile.Amazon.com.

Special thanks to Auggie for the photos. 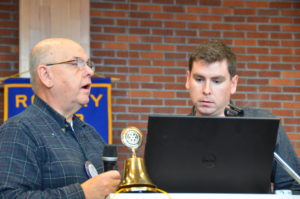 Mike Caruso and Andrew Aylor gave us a very informative presentation last week on both The Rotary Foundation and our own club’s foundation. In case you haven’t heard, 2017 will mark the 100th anniversary of The Rotary Foundation and a century of doing good in the world. It will be a big focus at the Atlanta convention next June, because it was in Atlanta in 1917 that then Rotary President Arch Klumph proposed the idea of an endowment fund. That one idea and an initial contribution of $26.50 from the Rotary Club of Kansas City set in motion a powerful force that has transformed millions of lives around the globe.

THE ROTARY FOUNDATION (TRF) Mike explained that the Foundation has six areas of focus:

There are a number of “supporting funds,” such as the Polio Plus fund and the Rotary Peace Centers fund, which has an endowment of $125 million now. (Mike also shared an update on the four Peace Fellow applicants selected out of seven sponsored by our district to attend Peace Centers. There will be an in-depth article on them on our website soon. He also mentioned that Rotary is looking to revamp the Peace Fellow program next year.)

Andrew gave us some history. Paul Harris, who lived from 1868 to 1947, was the founder of Rotary. There were 6,000 clubs when he passed way in 1947. Today, there are over 30,000. The Paul Harris Fellowship program was started in 1957 to acknowledge individuals who contribute $1000 to The Rotary Foundation. This program is one of the primary sources of funds for the Foundation.

To mark this historic year, a goal of $300 million, including contributions to the PolioPlus and other supporting funds, has been set. If you can make a special centennial gift beyond what you normally contribute, you can help to launch the Foundation into its second century of service. Only contributions received between 1 July 2016 and 30 June 2017 will count toward the goal.

Andrew’s dad started a unique program called “Paul Harris Groups,” where 6 members can each kick in $125/year for six years and the Club kicks in $25o to make $1000. We currently have 3 groups, and thanks to John Kerekanich, a new group was initiated at the meeting!

We have 16 Paul Harris Society members in our club (thanks to the good work of Mike Caruso!) Only one other club in our district has more–Lake Oswego with 18. Mike said the number of Paul Harris Fellows overall reached one million in 2006. 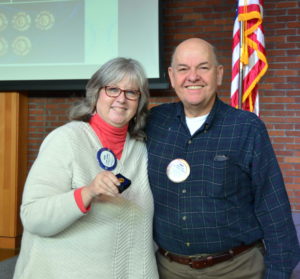 President Leah displays the pin Mike had just presented to her for her second Paul Harris Fellow award.

The primary sources of funds for our Club foundation are the annual April auction and Rota-Dent sales. This funds our local projects as well as projects we select that may be around the world or country.

Tony Lelack reported that 68 turkeys–over 900 lbs.–were donated and delivered to FISH to help make the holidays a bit better for some folks. Thank you, Tony! 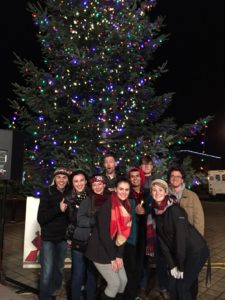 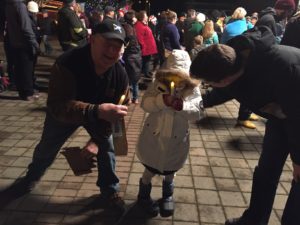 This photo is a bit dark, but Prez Leah took it of Jim Hirte presenting a candle to a young attendee.

There were also 7-8 Interactors from the high school who helped with set up and tear down.

It was a great event with about 1,200 people and it didn’t rain until after the event was over and everything was cleaned up.

Special thanks to Auggie for the meeting photos. And since his Dawgs beat Colorado last week, we now know what Auggie will be doing New Year’s Eve!